For the past week or so I have been at work painting my Old Glory 25's War of the Roses figures up to use with Piquet's Band of Brothers rules.  The strategy I am using to tackle the project is to paint individual nobles' retinues for the Battles of Barnet and Tewksbury (both rather small engagements, compared to others), which, once they have reached playable proportions, will be added to gradually with militia troops, mercenaries, and artillery.

I have finished Edward's retinue troops and thought I would share a few pictures.  All the figures are from Old Glory 25's (except for Edward himself, which is a Perry), and I must say, that Old Glory can be hit and miss, but the War of Roses range has impressed me so far (though some of the casts have been poor--par for the course).  It is definitely one of their better ranges from what I have seen, and they paint up easily.  They are detailed enough, but not overwrought--just my style.
On with the eye candy! (Click through for larger photos.)
I hope you enjoy!
Si Vales, bene est!
Posted by Felix Fox at 6:12 PM 10 comments:

Email ThisBlogThis!Share to TwitterShare to FacebookShare to Pinterest
Labels: Band of Brothers, Old Glory 25s, Perry, War of the Roses

I just wanted to put up a brief entry to show off a quick snap of my spiffy, just-received cards that I created via ArtsCow (big thanks to Santa Clarita Wargamer for the inspiration).  This is just a selection of them, of course.  I went with the same backs on my decks so that they would be more versatile.  And the best part about them: you can actually shuffle! 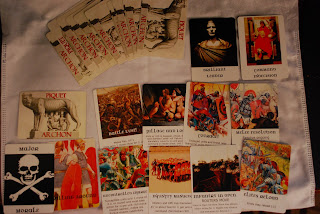 In other news, my Old Glory WOTR figs have arrived and I have busied myself painting those for Band of Brothers.  Pics are to come once I have a few units fully finished.
Posted by Felix Fox at 1:33 PM 3 comments:

I thought I would pop up a quick post with a picture of an ogre that I just finished.  It was largely painted for the hell of it, and purchased for $2 from a bargain bin at Historicon, so I thought I would have a little fun with it.  It will probably get used in the fantasy skirmishes I play with my son (I'm fiddling with adapting concepts from Hostile Realms for skirmish level games, since I can't get enough of card driven movement and adjustable die types), or may eventually wind up in a Hostile Realms army that looms somewhere on the horizon.  Without further ado:

I also wanted to share a picture from the workbench of a WIP.  I am starting work on a War of the Roses Yorkist army, and though my bulk of figures from Old Glory is still on the way, I have obtained a set of Perry's exquisitely sculpted Yorkist command figures. I decided I would pass the time waiting paiting up a couple of those, though I usually like to use command stands for last, or use them as a 'treat' in between painting the rank and file.  Here is a picture of the ever-dashing, ever-heroic Edward IV Plantagenet in his storied gilt armor (be it true or no, I wanted a hero figure like Edward to stand out on the table).  It is not finished yet, I still have to do some washes and a little highlighting, but I think I will like the way he turns out, especially when grouped with a standard bearer holding his banner aloft.  More pics to come in future.

In Piquet related news, the wife and I played Archon II on this Sunday last, and I hope to get a battle report of the encounter up at some point in the next week or so, if I can find the time.  Expect some pictures and a German ambush.

So here are some pictures I took of my now defunct Hundred Years war project.  The figures are Black Tree Designs (purchase from them at your own risk) and were one of the first major miniature purchases I ever made after getting into historicals (only about 4 years ago--I'm still fairly new to the hobby).  Their figures are well sculpted overall, but tend to run rather large, so they do not mix too well with other ranges, which is also a major pain if I ever do decide to revive this project, since I never want to order from them again after still having never received horses from this particular order (and I'm not holding my breath, since it's been 3 1/2 years).

I really like this period, particularly because in all my painting of ancients I find myself painting with the same colors over and over and over again and painting in muted tones, whereas these guys allow me to paint something a little brighter and practice some free-hand techniques.  This is also why I am excited to start on the War of the Roses figures I have coming to me in the mail from the fine folks at Old Glory.

Here are some photos:

Hello and welcome to Bellulula (Bell-yool-yoo-lah: the diminutive of the diminutive of the Latin bella, 'wars'--hence the header, 'teensy weensy wars'), a small corner of the Interwebs (tm) dedicated to my playing with toys--I have no illusions.  I have no idea how often I will update, but this at least gives me an outlet to, if anything, post pictures of my miniatures.  At the end of the day, that's all folks really want isn't it? To see your painted lead?

For example, here are some pictures of my recently 'completed' (i.e. enough to game with, by no means finished) armies of Romans and ancient Germans.  The pictures of the figs on the table came from a recent game of Piquet using the Archon II rules supplement for Ancient and Dark Ages warfare: an excellent set of rules! Figures are by and large Foundry (and no I didn't pay full price).  Some Old Glory Germans may be slightly visible too.


I hope you enjoy, and I'm sure I will have more to show for myself soon.  These are the pics I had lying around at hand.