Here we feature the commanders of my recently painted Lancastrian forces for the Battle of Tewkesbury. We have already had one re-fight, using a version of Piquet's Hostile Realms which I have modified slightly for period flavor and tactics, and I am tentatively calling 'Hostile Roses.' There will be a short write-up on the action in the days to come when I find the time.

Here are the ward commanders beginning with the vanward and proceeding down the line.

First we have Edmund Beaufort, 4th Duke of Somerset (and his infamous axe). One of the myths surrounding the Lancastrian collapse on the field is that Somerset, in his rage at John Wenlock over his lack of support for Somerset's (botched) flanking maneuver, caved in the old soldier's skull with his axe--an act which helped precipitate the rout. He was facing Richard, Duke of Gloucester across the field (as Edward IV had his vanward on the left, presumably to match his more skilled younger brother against the slightly more experienced Beaufort, rather than leaving the job to Hastings, who had performed poorly at Barnet in the weeks prior).


In the mainward we have the tough ol' John, Lord Wenlock. Wenlock had once been on the Yorkist side, but that was because he was a devoted follower of the Earl of Warwick. When Warwick betrayed to Margaret of Anjou, he took his seasoned commander with him. For the scenario, I have put Edward of Westminster, Prince of Wales with Wenlock in a sort of 'understudy' role and as an objective for the Yorkist forces. Wenlock was pitted against the ever-doughty (and later doughy) Edward IV.

Bringing up the rear is John Courtenay, 15th Earl of Devon. Devon was squared off across the field from Lord Hastings. He was not particularly influential in the battle from reports, since it was largely decided on the other side.

I hope you enjoy the photos! Good gaming to all.

I have recently purchased some boxes of Perry Plastics from their Wars of the Roses range. Now, I admit, I have loathed my previous experiences with plastic figures. But I have come to realize that this was likely due to the fact that my original plans with all of the plastics I have previously purchased was to build an entire force with them. After modelling one unit, fatigue sets in as I become sick of dealing with fiddly-bits and wondering why on earth someone would cast a plastic miniature in 12-15 different pieces. Exasperated with the agonizingly slow progress, I give up.

This time, however, I purchased some plastic sets with a new mindset: to use them to build small groups of unique figures, for, say, things like command stands and individual characters. This approach is already paying off. It also helps that the Perry plastics are the first ones that hold sufficient detail for them to not look blobular (Wargames Factory, anyone?) to me. The Perrys have crafted plastic miniatures that look little different than metals when placed side-by-side, and that is a significant achievement.

I have put together a command stand with Edward IV a-horse. This was entirely surplus to force requirements, as I already have a command stand with Edward a-foot in my Yorkist army. The process was a great pleasure--an entirely new experience for me when dealing with plastics--and I think the results turned out well. All of the figures are built from some combination of the three Wars of the Roses sets released by Perry miniatures. 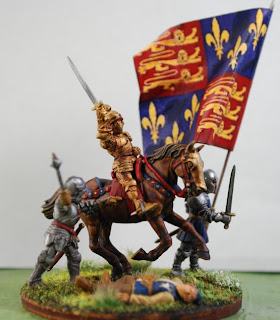 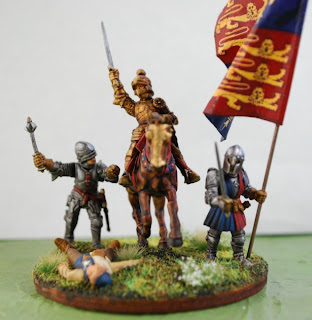 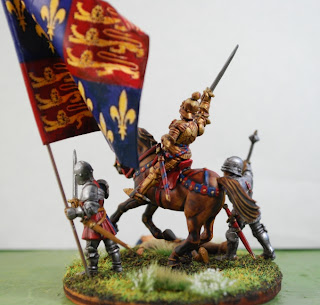 In other news on the Wars of the Roses front, my Lancastrian force has come to 'completion,' reaching the original point that I hoped to get it to when I began the WOTR project a little less than a year ago. This makes me quite happy, and, of course, there will be pictures in days to come. The collection of Wars of the Roses figures now stands at around 400 figures painted. I will continue to work on it (and still am: some levy units are on the painting desk as I write), but am glad to have reached a checkpoint, and able to tick something off of my 'Miniature to-do list.'