I have begun to build some 15mm fantasy forces, and due to a very good find in the flea market at Historicon, I find myself in possession of a decent-sized, fully-painted army of 15mm orcs,

I have also started to paint a dark elven force. Below are some photos of a sampling of figures as examples, Rather than photographing whole units, I have just taken a picture of a single figure type from each of two types of units I have painted so far. The figures are by Splintered Light, a company that I do not hesitate to recommend.

First, we have some figures that I am using as 'corsair' types:

These figures below are meant to be wood elves--ranger types, I think--but I have turned them to the dark side.

And here, to lead them, we have a character figure. He is definitely the corsair captain, what with his flowing shirt and sea-monster skin cloak. 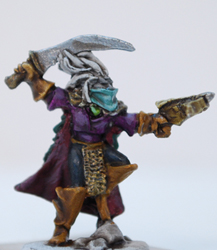 Email ThisBlogThis!Share to TwitterShare to FacebookShare to Pinterest
Labels: Fantasy

And now for something completely different...Reaper's Bones figures

I, like many others, backed the Reaper Bones Kickstarter campaign, and received my box of vinyl miniatures a little over a month ago. For the price, I thought it was a decent purchase, especially with a 12-year-old son who is just getting into painting. The figures themselves are nicely detailed for being made of plastic, though as one may expect, lack some of the definition of Reaper's metal figures.

The main place where I have been disappointed in the figures is in Reaper's lack of upfrontness about the impossibility of spray priming the figures with a standard paint (I generally prime with Krylon white primer and swear by its quality). This results in sticky figures that will never dry, as the vinyl which the figures are made from is not porous enough to allow for drying. I know that they say that you can paint them without priming, and this is true, if you don't mind a crappy paint job that uses super thick layers of paint and you don't intend on painting with washes.

So long story short the problem can be remedied by spraying figures with a paint engineered for hard plastics (I have used Krylon's Fusion line of paints). Or, if you have some that have already been sprayed with standard primer and remain sticky, hit them with a spray of cheap matte varnish. Alternatively, you can prime by hand; not for me as it is too time consuming.

So, what are some of my results from the figures I have painted so far? Let's have a look.

Here is a group of sci-fi hero types that I have painted to go together as a 'squad' of sorts. The group includes a female sniper with a giant gun and Reaper's typical gratuitously over-sized female bust, along with a big mechanical dude with an 'electro-sword.' I have never painted sci-fi miniatures before and thought I would give these a go. I have no use for them at all, so I have added them to my sale/swap page. If you are interested, make me an offer. 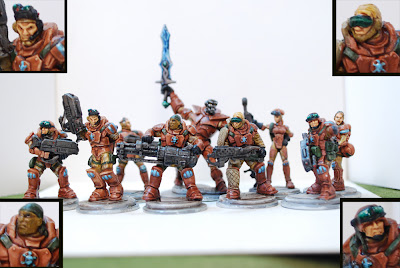 I have also painted up a unit of kobolds for my 28mm fantasy bad guys. Basing is not complete, but you'll get over it, I am sure.

For the price, these figures deliver decent quality. Just know how to prime them.

I was fortunate to participate in this re-fight of the Battle of Novara run at this years Historicon by my friend Peter (of Blunders on the Danube, where you can see his pictures and read his report). The rules were Band of Brothers (2nd) by Piquet. Peter's camera ran out of space, so I figured I should get these up ASAP to supplement his own blog post. This game was the highlight of the convention for me: it was an excellent scenario, a great company of experienced Piqueteers, and it was tense the whole way through.

Without further ado, enjoy the pictures! They are in chronological order as the battle progressed. 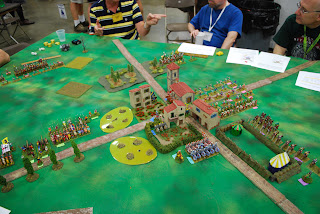 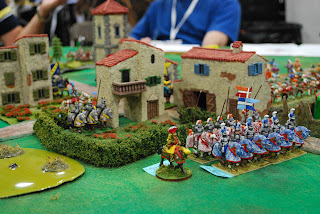 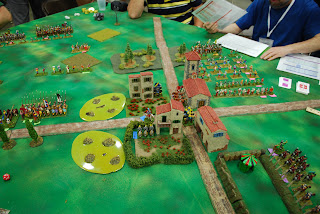 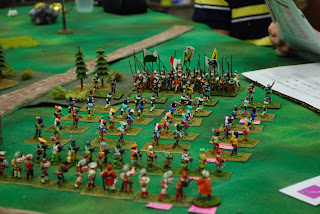 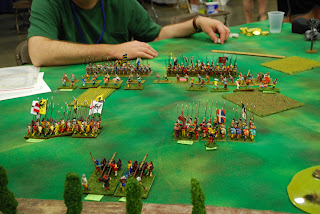 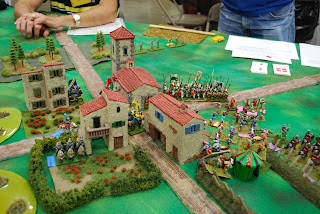 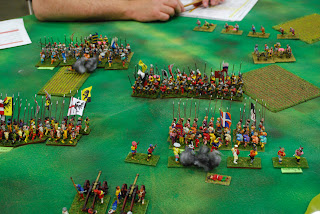 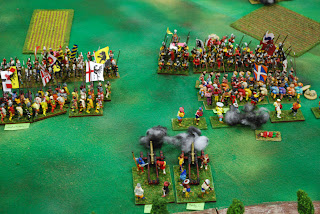 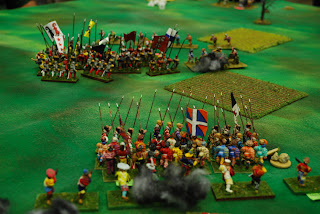 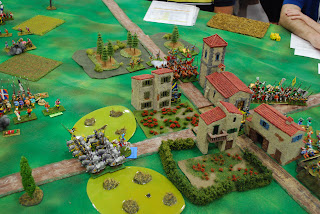 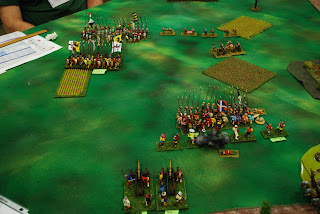 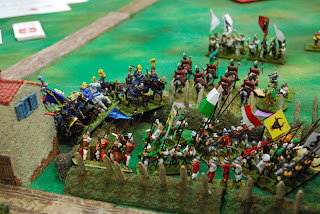 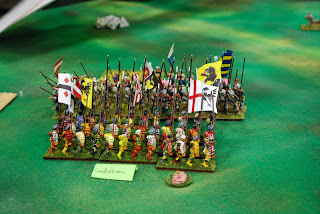 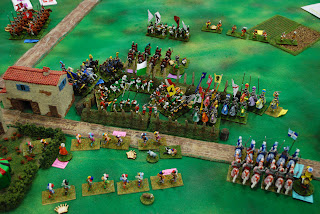 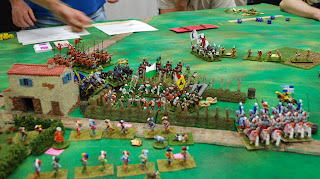 Email ThisBlogThis!Share to TwitterShare to FacebookShare to Pinterest
Labels: Band of Brothers, Historicon

I just wanted to quickly post up a couple pictures from a recent battle fought in my living room at our new place in northern Virginia.

The wife and I fought out a hypothetical War of the Roses battle the week before Historicon (I hope to do a more detailed post with pictures from that soon). The set up was based on C. S. Grant's 'Making the best of a bad situation' scenario. The Lancastrians, marching up country, stumble into a smaller encamped Yorkist host presenting significant challenges for both sides: the Lancastrians are all deployed in lines marched halfway across the table, while the Yorkists are outnumbered and in a disorganized clump behind a hill.

A smaller action was fought on a separate table that would eventually lead onto the main table, in which an offshoot of the Lancastrian vanguard has to split off to delay a group of Yorkist reinforcements.

The rules were my own period specific variant of Hostile Realms by Piquet, which I have taken to calling Hostile Roses. I am continuing to develop these and there is still much adjustment to be made. The wife graciously offered to play the Lancastrians (since she knows I despise the usurping dogs!!), while I took command of the Yorkists.

The result was a decisive Yorkist victory. The Lancastrian vanguard  did an excellent job of keeping off the Yorkist reinforcements, but back on the main table the Yorkists crushed the center of the Lancastrain army.

It was an enjoyable afternoon/evening with the wife; much fun was had by all.